“Apoptosis” is a generally programmed mechanism of cell death. When certain stimulation is applied to a cell, its gene triggers the self destruction device and the cell dies. Once apoptosis occurs to a cell, DNA of cancer cells will be fragmented and disappear. 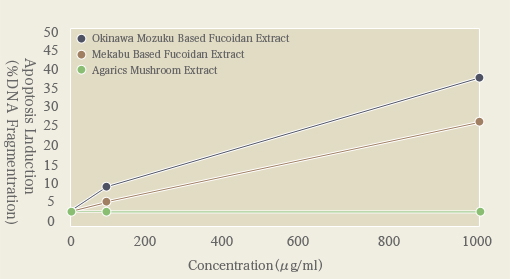 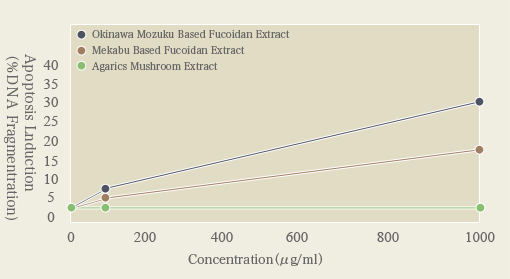 We examined how mozuku derived fucoidan would affect apoptosis induction on the growth of human breast cancer cell strains (MCF-7).

We examined the activation of caspase-7 after it was added to fucoidan. (Illustration 2)
Caspase ・・・Caspase-7, apoptosis-related cysteine peptidase, and Caspase-7 is a member of the caspase (cysteine aspartate protease) family of proteins, and has been shown to be an executioner protein of apoptosis. Sequential activation of caspases plays a central role in the execution-phase of cell apoptosis. Caspases exist as inactive proenzymes which undergo proteolytic processing by upstream caspases (caspase-8, -9) at conserved aspartic residues to produce two subunits, large and small, that dimerize to form the active enzyme in the form of a heterotetramer. 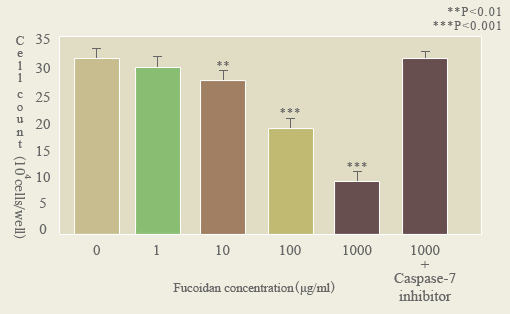 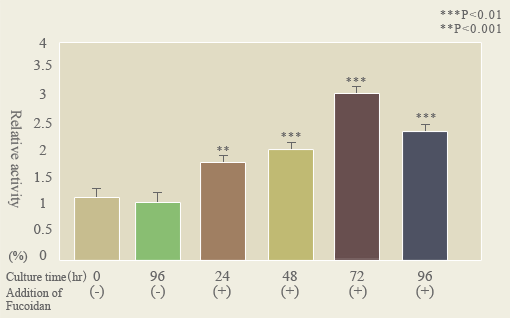 Therefore we thought that mozuku derived fucoidan induced apoptosis when activate caspase-7. So, then we measured caspase-7, caspase-7 was activated by fucoidan. (Illustration 2)