Mitigation action of fucoidan on anticancer drug treatment side effects

Procedure of the experiment
To prepare a model mouse for anti-cancer agent treatment, we induced side effects (immunosuppressant) by administering an anti-cancer agent "5-fluorouracil (5-FU)" 5 times every other day. We also prepared another group of mice that were administered physiological saline that contains no 5-FU, in order to understand the state of the immune system when no anti-cancer treatment is provided.


These two groups of mice were further divided into two (to make a total of 4 groups), one was given a normal (Control) feed and the other group was given Fucoidan Mix AG, while being administered the anti-cancer agent. After 12 days, we took immune cells from the spleen, and made measurements to see various immune indicators. 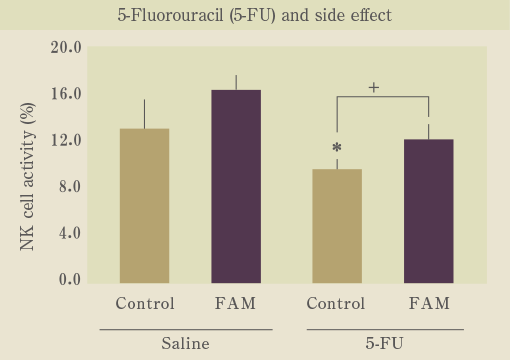