Experiment was conducted with four groups of mice, which had been respectively bred, for 23 days, on “control feed”, “Mozuku (Nemacystus Decipiens) fucoidan mixed feed”, “Mekabu (Foot Stem of kelp (Laminaria Japonica)) fucoidan mixed feed” and “Agaricus mycelium extract mixed feed”. Weights of Sarcoma cells in each group were compared, and except for the control group, significant reductions were observed in all the groups. Effects of fucoidan on tumor growth

［1］InVitro Anti-tumor activity Test
The anti-tumor activity of fucoidan, derived from Mozuku (Nemacystus Decipiens), was evaluated by determining survival rates of living cells. The fucoidan was added to normal PBL (Peripheral Blood Lymphocyte) cells and Molt-4 cells (a subcultured human tumor cell of Acute Lymphoblastic Leukemia), and their survival rates were compared. Concentration dependent decrease in survival rate was observed with the Molt-4 cells. However, the rate of PBL cells was not influenced by the presence of fucoidan. Thus, fucoidan appears to have an effect specifically on tumor cells.

［2］In Vivo Anti-tumor activity Test
In order to evaluate the anti-tumor activity of fucoidan, sarcoma 180 (a subculture of mouse sarcoma cells) was subcutaneously applied to two groups of nude mice. One group was then orally administered with fucoidan (100mg/kg/day, 1 dose/day), and a placebo feed was fed to the other group as control. Significant difference in growth of sarcoma cells was observed after 14th day (p<0.005) and 21st day (p<0.0005) of the experiment. The growth of the sarcoma cells was suppressed in the mice, to which fucoidan had been administered. From such observation, it was concluded that fucoidan may have a growth suppression effect on tumor cells. 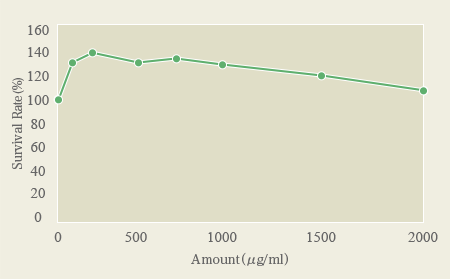 Influence of Fucoidan on PBL 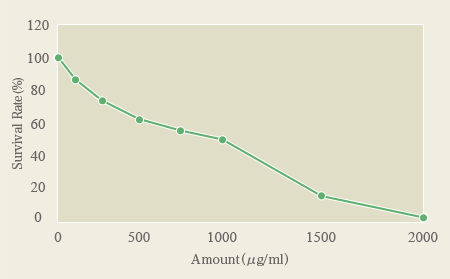 Influence of Fucoidan on Molt4 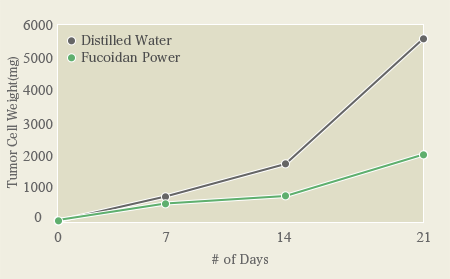